My family has taken to watching the Big Bang Theory, and while I am extraordinarily tired of the laugh track, I continue to watch.

Naturally, any show targeted at nerds is bound to draw the ire of nerds, who are famed for their desire to find flaws in the opinions and statements of others, especially those who consider themselves nerdy. Indeed, an all-consuming desire for intellectual one-upsmanship (cf. Stephen Potter’s excellent books on the topic) may perhaps be regarded as the sine qua non of nerdhood. This desire can also manifest itself in the needless selection of lengthier words at the expense of more concise ones, the tendency to cite obscure sources, and the general tendency to blather at length.

I would like to take issue on this occasion with the recurring incidence of the game “Rock, Paper, Scissors, Lizard, Spock.” It has a fine wikipedia page, and I won’t describe it here.

My issue is that this RPS variant—and indeed, all of the ones I’ve seen published—can concisely be expressed as simple games of modulo arithmetic. That is:

Naturally, you can generalize this to any odd number.

It seems to me that this is at the same time simpler, more general, and more nerdy than the game played by those on the show, and I would hope that they would consider changing to my variant, which I call John Brinckerhoff Clements.

Yes, there’s a note on this in the Wikipedia page. Yes, I added it. 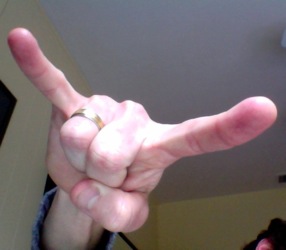 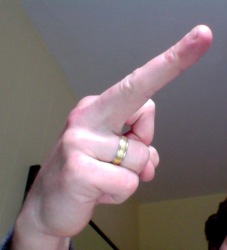 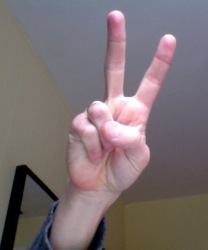 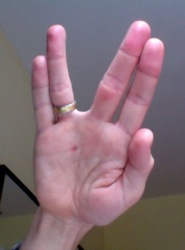 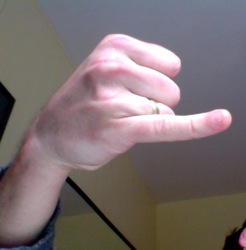 This hand is not a game entry. If you see this shape, your opponent is not playing the game:

So the next time someone gives you the finger, just point directly at them, and you win.

Ever taken a look at FORTRAN? Actually, I haven’t, either. FORTRAN is basically the oldest non-assembly language around, which is to say the oldest language where someone actually considered “what would programmers like to say?”, rather than “what should the machine be able to do?”

Also, this is FORTRAN 90, which is a much more recent update of FORTRAN. After a quick reading of the Wikipedia page, it looks like f90 (I’m just tired of writing in all caps) is the first update since 1977, which seems ancient but is in fact about halfway between the first invention of FORTRAN and the present day.

It removes many of the restrictions due to machine limitations (allowing free-form source code), and also allows recursive calls, something that the original FORTRAN didn’t—life is easy when you can statically allocate your stack frames!

It also has modules, and… gee whiz: dynamic allocation? Interesting: sounds like it would be much harder to compile f90 code into super-fast assembly than f77, but I suppose you’d have to ask an expert.

Hmmm… I wonder if there’s a formal semantics for more recent versions of Fortran 90? A quick google search suggests the answer is “no”. On the other hand, I’m not sure who would be interested in such a thing; you might be able to sell it as “this formal semantics could identify bugs in your optimization routines”. Anyone want to pay for this?

Okay, back to the source code. What’s going on here?

The first and most obvious thing here is that F90 clearly has a tradition of LONG_CAPITALIZED_VARIABLE_NAMES. COBOL had this going on too, and also an undergraduate classmate of mine named Celeste (RIP, no joke).

I personally find this fairly distracting; it means that a line of source code can’t contain more than two or three tokens, and means that computations have to be split over a whole bunch of lines. On the other hand, local variables apparently have to be declared at the top, so it’s hard to split a large computation into small ones by giving good names to intermediate values.

I think there’s a fairly large split in the world between people who believe that variables should be declared at the top of functions and those who believe that they should be able to appear anywhere; I think that the decls-only-at-top people are imperative people who are planning on doing all kinds of horrible mutation everywhere, and declaring things at the top is their way of preparing themselves for the horror below. The decls-anywhere people (can you tell which I am?), on the other hand, don’t mutate their bindings; these bindings are just a way of giving meaningful names to parts of computation, and there’s no need to hoist them all to the top.

So F90 has the pull toward decls-anywhere that stems from long identifier names, but it’s used by super-imperative people. How do they get any work done? Okay, now I’m just being snide. Sorry. I should point out here that Fortran is clearly one of the massive success stories of language design; it’s one of the first languages, and still in hugely widespread use, thanks in large part to the total 90-degree turn taken by the scientific computing community into C, which is simultaneously the fastest and least optimizable/maintainable language. See Fran Allen’s comments here! Sorry, off topic.

Other, more minor comments: the error-checking code following the dynamic allocation looks like it could easily be abstracted away, especially considering that the error messages aren’t parameterized over the context in any way that I can see.

Broadly speaking, I think I would make local declarations legal anywhere, and shorten up those variable names. Otherwise, looks nice!

Here’s another one, randomly chosen from the source for Apache OpenOffice’s 800K lines of Java (I should point out that there are something like 10M lines of C++ in the project).

A few seconds makes it clear that this is … the iterator interface. Minus the horrible “remove” call, and plus a bunch of other ones, generally fairly inoffensive.

One point here is that I probably shouldn’t have excluded .h files from my random C file excerpt; in Java, interface files aren’t distinguished from “source” files in the same way they are in C.

Questions for the audience: